"America is not broke. Cities, states and counties are not broke. Even most of the ones that are struggling have huge financial resources that they are ignoring or failing to tap—resources that could be huge game changers for funding education, infrastructure and more.
That’s the main message of Scott Baker’s book, which gives, in great detail, four huge solutions that represent trillions of dollars in untapped wealth...The first step is to get these ideas on the table, into the conversation, to start making politicians aware of the possibilities, then putting their feet to the fire, getting them to start supporting them. Like marriage equality and marijuana legalizations, which are gradually spreading across the nation, these ideas will probably start out locally and, as they are seen to be successful, grow to be adopted by more and more cities, counties, and states. Already, there are advocacy groups and organizations working to make some of them happen.
This book should be required reading for municipal, county and state money managers. But, because of the powerful effects these approaches could have on undermining and disrupting the too-big-to-fail banking and financial industries, it should also be on the must-read book for activists who are looking for non-electoral ways to change the system." - Rob Kall, from the Foreword

"The litany of America’s economic woes is as familiar as the newscycle: Social Security or Medicare is going to run out of money, there is no money for other social programs either, no money to run the government, we can’t support the yawning deficit, we have “to mend our ways,” above all, cut, cut, cut, and don’t expect America to ever be the “generous” nation it once was. Our jobs have gone to China and, ironically, we can’t even pay our bills without the Chinese buying up our Treasuries. Above all, America is in decline and on an unsustainable path (though oddly, there are more
American billionaires than ever, and more than any other country). It’s depressing, dispiriting and discouraging…it’s probably meant to be all of those. We’ll discuss why in a moment.

But…what if it’s not true?

What if, instead of being broke, America has vast untapped resources and options that are simply never spoken of ? And I don’t mean just that we have some of the brightest, most creative, most ambitious, hardest-working people in the world. We do have all of those, but there’s something else."

"...consider that the common opponent of both Liberals and Conservatives may be the same: the Monopolizers of resources - natural, but also including political and monetary power." 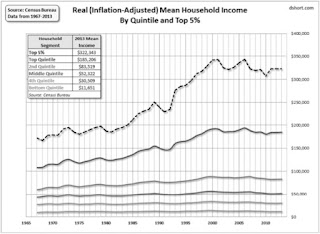 "I believe a clear case can be made that asset inflation is causing inflation from the top down, since the bottom 60% of the population has not seen an inflation adjusted raise in approximately 45 years, and even the top quintile has only seen a modest real raise (see figure 3)."

"Although the economic literature, green-eyeshade accountants, pundit bloviaters, and ideological ranters, love to ask "How to pay for Social Security,"141 142 they are all asking the wrong question.
The right question is "What is the Social Security Multiplier?"...What is Social Security's multiplier effect then? Says AARP:
A new report from AARP, in fact, shows that every $1 paid out by Social Security generates, in turn, about $2 of total output for the U.S. economy - or nearly $1.4 trillion in 2012.

And a paper from the Southern Rural Development Center says:
Similarly, results of an economic impact analysis of OASDI payments at 2009 levels…indicated an output multiplier of about 1.8 in the U.S. economy. As such, every dollar paid in OASDI generated an additional 80 cents in the economy. To put it another way, the $675 billion paid in OASDI benefits during 2009 translated into an economic output of slightly over $1.2 trillion dollars in the U.S. economy.

So, this means that there is a net gain for every dollar spent on Social Security and, though this is somewhat controversial, it may be as high as double the expense."


"Now, simply producing debt-free money and putting people to work with it will only get you so far. Yes, it will bring down unemployment and create millions of jobs in public works, as it did in Franklin D. Roosevelt's time, only this time, without debt to the top 1% in the form of Economic Rent.168 However, to fully end the monopolies and speculation that lead to such vast wealth inequality in the first place, one must also tax the Land...
A major solution to excessive inequality and poverty, which will also improve productivity, stir innovation, and create a sustainable and eco-friendly economy, is the Land Value Tax. In a recent video by financial journalist Fred Harrison, Georgist economics professor Mason Gaffney calculates that $5.3 trillion currently collected in taxes at all levels could, if untaxed, be collected from economic rent instead. Professor Nicolaus Tideman, who also appears in that video, reports to me in an email that in his view the rent readily available through taxation is at least $1.5 trillion, compared to about $175 billion in rent collected today. Whatever the exact number of trillions, this untaxed rent could be taxed and returned to the public whose demand created it in the first place without damaging the economy, and in fact spurring it.
The basic problem is that a few monopolists own the Land, while charging the rest of us rent for our necessary use of it. Without Land, people cannot live. However, the value of it comes from our collective demand."

..."For example, in New York City, there are now five new ultra-lux skyscrapers, rivaling or exceeding the iconic Empire State Building in height, that have a 94% property tax abatement, thanks to special deals within the notoriously Real Estate friendly legislature. One result of this is that in a building called One57, located on what the New York Times calls “Billionaire’s Row,” a penthouse recently sold for $95 million! But, whoever bought the skyview apartment at that skyhigh price, won’t be burdened with high property taxes as well. In fact, he or she will pay just $1,500 a month – less than the property taxes on an average 2-bedroom rental in New York City - for this 11,000 square foot “investment.” No wonder New York Magazine called these kinds of properties “Stash Pads”!"

..."What is one to make of the last of our four major categories of macro-economic solutions? On the one hand, it is basically fairly routine, even boring, basic accounting. On the other hand, it adds up to trillions, possibly 10s of trillions, or even over $100 trillion, far more than the other three solutions, combined.
...In a related article on Examiner.com, citing the one above, CAFR reformer and teacher, Carl Herman, writes:
"California has a budget deficit of ~$20 billion. The combined investments of CAFRs for the state of CA, Los Angeles County, and the City of Los Angeles is over $450 billion; over 22 times the amount of the budget shortfall. If just these three state agencies surrendered their withheld money back to the public instead of lording over it as communists, each Californian would receive ~$15,000. To pay for the $1.8 billion shortfall in the retirement account, each individual could be taxed $50."