Radio Interview on "America is Not Broke!" by Jim Hogue, Host of The House on Pooh Corner

During my third 1 1/2 hour interview by Vermont Public Banking/Monetary Reformer radio show host Jim Hogue, host of "The House on Pooh Corner" we talked about my newly published book, "America is Not Broke!" available on Amazon and from the publisher, Tayen Lane in ebook, softcover and hardcover.
The topics followed the 4 main chapters in the book: Monetary Reform, Georgism, Public Banking, and Government Financial Asset Hoarding. We also talked about banks, their role in derailing the economy and the risk they take and expose all of us to and why it's allowed to continue. The solutions offered in the book show a way out. I hope you will have a listen.

Rob Kall Bottom Up radio Interview with Scott Baker: America Is Not Broke

The Rob Kall Bottom Up Radio Show Podcast
America Is NOT Broke: Interview with Scott Baker

Scott Baker is one of the managing editors and the economics editor for OpEdNews, a lecturer at the New York Henry George School, and the New York coordinator for the Public Banking institute. And he's the author of a new book, America Is Not Broke - Four Multi-trillion Dollar Paths to a Thriving America.

Rob: what's the basic concept of the book

Basically I'm challenging the concept that America's out of money"

I'm doing it in a different way. There are four macro-solutions that people don't know about that would put trillions into the economy.

Rob: Trillions into the economy. Why isn't this being done?

For example, money creation is the province of the banks, and they don't want to let go of it. We did it before, under Lincoln, when we created sovereign money. They US can produce money as it needs to.

Book Discussion of "America is Not Broke!" on "It's Our Money - with host Walt McRee (Chair of the Public Banking Institute)"

n the world of monetary reformists, there’s a clear understanding that things not only shouldn’t continue as they are, they can’t continue as they are – that systemic failure is upon us as current social and political outcomes tear at the fabric of civil life. Ellen speaks with Gar Alperovitz, one of America’s most venerable reformist thinkers and policy experts, about his new “The Next System Project” to help design and precipitate what should happen next.

Also, maybe the national debt is unnecessary after all – author Scott Baker talks with co-host Walt McRee about his new book “America is Not Broke,”- 36 minutes in to 44 minutes out.

TV Appearance on "Breaking the Set" 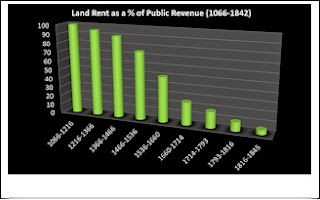 I was happy to receive an invitation to appear on the popular RT TV show, "Breaking the Set" with Abby Martin, to talk about Geoism/Georgism. The invitation came the night before, and I was originally scheduled to be interviewed remotely in their NYC studio the next evening at 6:00, but a surprise NYC winter snowstorm pushed that up to 3:30pm! Luckily, I don't have to study Georgism very much any more.

You can see the archived interview, starting about 6:00 minutes in, for about 7:00 minutes.


You can click on the transcript icon if you need the written transcript for some reason.

Abby Martin is a quick study and I hope to have a future chance to appear on her show. There are more economic reforms. Maybe next time we can talk about Greenbacks...


They cut about a minute of me talking about our group, Common Ground-NYC's, local efforts, but it was still a good interview and probably an eye-opener to their global audience.
Posted by Scott Baker at 12:09 PM 36 comments:

Public money for private benefit? I examined a selection of development projects in New York City, and evaluates the economic benefits given to encourage development. There are 10s of billions in privatized rent that ought to be going to the city, for value created by all of us! Instead it is going to private owners of land who did nothing to create the value from location. 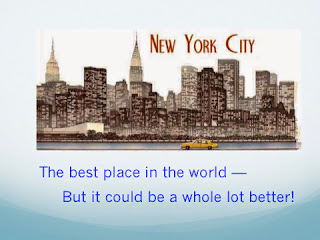 Henry George realized this injustice and how Land Rent could be collected for the common good in 1879, when he wrote Progress and Poverty. Now we can put that realization into practical terms, as this session did with real life examples for the most valuable real estate in the county - New York City!

This is an updated presentation of the one I gave for the school last February, 2014.

The video is in 3 parts. Part one has some audio problems in the beginning but once I got going it becomes easier to hear.


The slideshows for this presentation may be found here:

Joining me were Walt McRee, Board member and Communications Director of PBI (and since then named Chair of PBI), and Joan Bartl, the founder of the New Jersey Public Bank Campaign.

My presentation on the need, workings of, and activity towards, a Public Bank in New York State, and locally, came first and lasted for about half the 1 hour and fifty minute session. Following that was an informed Q&A panel discussion with the 18 attendees. We branched into areas of monetary reform, politics, and basic fairness issues.

The final video was made possible by the much-appreciated work of Manny Manhattan, a member of Occupy Public Banking and host of his own local access TV show.

Presentations like this are meant to be a beginning, not an end, and I look forward to the activists approaching their Electeds, community organizers, business owners, unions, and concerned citizens.


A downloadable blank form for citizens, and another one for Electeds, to sign in favor of a local PB study bill sponsored by state Assembly Member Sandy Galef is available on the New York Public Banking Facebook page. My hope is to get enough of these to influence Assembly members and the State Senate (Senator James Sanders has sponsored a companion bill in the Senate) to get more co-sponsors for the study bill. An e-petition describing the bill may be found here and the actual Assembly bill here and the Senate version here. There are 10 co-sponsors and 2 co-sponsors on these bills respectively. We need many more!

Please share this video with as many pro-Public Banking people as possible, and also the related slideshow here: http://www.slideshare.net/ScottOnTheSpot/return-to-prosperity-for-goshen

I also discuss Public Banking in chapter 3 of my new book, "America is Not Broke!" which may be purchased on the publisher's site here: https://tayen-lane.squarespace.com/america-is-not-broke and on Amazon: http://amzn.to/1MCxYA2.